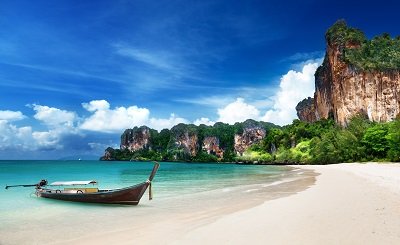 Thailand enjoys a tropical climate with a variety of climatic influences that affect different parts of the country at different times of the year. Generally North Thailand, above Bangkok, has three seasons, whilst the South has only two.

Dry Season - November to May
From November to May the weather is generally dry. The most comfortable time to travel is from November to February when temperatures are generally kept cooler by the welcome breeze generated by the northwest monsoon. Temperatures and humidity build through April / May in what can be termed the hot, dry season until the rains break. At this time the heat is particularly punishing in Bangkok and the East, but if you’re holidaying in the northern hills the elevation makes it far more comfortable.

Wet Season - June to October
As with most of South East Asia the wet season is dominated by the southwest monsoon that runs from June to October, during which time rainfall is at its heaviest.

Two seasons dominate Southern Thailand: the wet and the dry, but the timeline is different on the east and west coasts. There’s really no cool season, as temperatures only vary by about 5 degrees C between the hottest and coldest months of the year.

The best beach weeather is during our winter from November to March. The southwest monsoon brings heavy afternoon rain between April and October.

The best beach weeather is during our winter from February to September. Most rain falls between October and January. This is great from a holidaymaker’s perspective as for most of the year you can enjoy good beach weather on one coast or the other.

Back to Thailand Holidays

Let us do the work

Each price is a guideline for a private (non group) holiday including flights from the UK.

Please view each suggested itinerary as the starting point from which we can create a holiday around your interests, that travels at your pace and hits your budget.

When quoting we'll offer a range of options to learn what you like and dislike and develop the holiday from here.

It all starts with just a call or email.